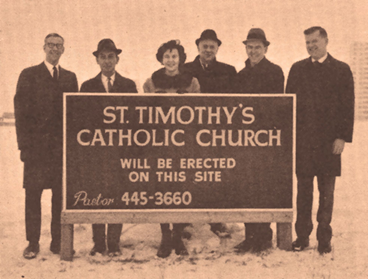 With the opening of St. Timothy's school in November 1964, Fr. Harding set up a Sunday Mass schedule in the school's 40' x 50' general purpose room.  It held two hundred people, but sometimes packed in 250 to 300.  Fr. Bernard Mahoney, who assisted at Holy Spirit Parish, came to celebrate the first Eucharist at 10:00 a.m. on Sunday, September 19, 1965.

In February of 1966, the first get-acquainted dance in St. Bonaventure's Parish Hall.  About 240 attended. Before the end of the night, it was announced that a Parish Council would be elected the following Sunday. It was given the mandate to prepare a brief to be presented to the chancery office requesting a parish and pastor.  One of the first things the Council did was to organize a census of the area with the result that five hundred Catholic families were identified.

In response to our request, in June 1966, Archbishop Pocock created the Parish of St. Timothy and appointed the first resident pastor, Father William O'Brien. Father purchased a house on Deepglade Road in Henry Farm and established the first rectory there.

Under Fr. Bill's guidance the parish community soon outgrew the general-purpose room of the school and moved to the cafetorium at Woodbine Junior High. Then, as still larger quarters were needed, the parish moved to the auditorium in George Vanier School.

Much joy we experienced when the sketch-drawings for new church were first unveiled at a wine and cheese party at Edwards Gardens. Then there was further the joy as the construction program began.

The greatest joy had to be reserved for a Saturday in August of 1969 when the community of St. Timothy finally came home after wandering for three years through the desert…a general-purpose room, a cafeteria, an auditorium.  What glorious music was heard that day from 'old Bertha', our original organ, as parishioners walked from the parking lot to the front door of the church.

The second pastor, Fr. Leo Perusse arrived in July 1972, fresh from the air force chaplaincy. He remained until his tragic death from cancer in July 1987.  Fr. Bill Lynch was pastor in the late eighties and Fr. Hugh Manley in the nineties.

One parishioner, Peter Lackmanec, has been ordained to the priesthood.  St. Timothy's has also nurtured a number of permanent deacons:  Joe McTeague in '74, Ron McFarland in '76, Bill Callaghan in '80, Dick Mann in '90.  In ’91, Dick Wirth, a former parishioner, and head usher, was ordained a permanent deacon for the Archdiocese of Philadelphia in Pennsylvania.   Tom Welsh was ordained and appointed to St. Timothy in 2006 and is still serving here.  In the spring 2016 David Quail, was ordained during the 50th Jubilee Year of the parish and is now serving at St. Edward the Confessor Parish.  Joseph Yan was ordained in 2018 and served in St. Timothy until his untimely death in May 2019.

A significant development in the history of St. Timothy’s occurred in the year 1999 when the Companions of the Cross, a new community founded in Ottawa in 1985, assumed responsibility for the parish.  The first Companions of the Cross pastor appointed was Fr. Marc Syrenne.  Fr. Dennis Hayes took over as pastor from 2004 to 2006, Fr. Randy Hendriks from 2006 to 2009, Fr. Charles Orchard from 2009 to 2011, and Fr. Francis Ching as Parish Administrator from 2011 to 2014.  In 2014, Fr. Roger Vandenakker became pastor and in 2020, Fr. Galen Bank became the current pastor.  Many associate pastors from the Companions of the Cross have also served since the community arrived in 1999, including Fr. George Sammut, Fr. John Likozar, Fr. Fernando Suarez, Fr. Jerry Gaurvreau, Fr. Francis Ching, Fr. Bernard Messier, Fr. Ken Lao and currently Fr. Daren Bryk.

A major renovation of the church building took place in 2009-2010 adding a much-needed elevator, handicap accessible washrooms in the foyer and church hall, air conditioning as well as other design changes and overall general refurbishing.

Leading up to and completed in 2016, for the parish’s 50th anniversary, further renovations were undertaken to enhance the overall beauty and sacredness of the church and sanctuary as well as general refurbishment of the hall and kitchen which were not able to be completed during the previous renovations due to financial constraints.